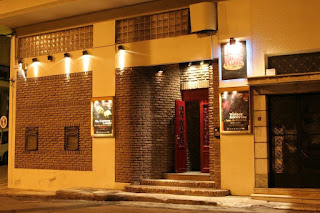 This song was inspired by my trip to Greece with Vagabond Opera. We performed in a jazz club in Athens called the Half Note. Unlike other times we weren't touring, but rather had a two-week engagement. This was lovely because it meant that rather than being in a different town every day with little or no free time, we had only to play our engagement (9-Midnight), and then we were free. Free to tour the city during the day and free to go to another club EVERY NIGHT, the same club where we sat, in awed amazement as watched a band, a band where men and women, arrayed side by side on a semi-circle on a small stage played traditional Rembetiko music. Rembetiko would be hard to describe in a nutshell, but it's often called the Blues of Greece, and you can hear a sample here from the movie Rembetiko (Which I believe is free on youtube). You'll get the idea and you'll see how it inspired my song, in English, with the tragic lyrics that are typical of the genre. This was a Vagabond Opera tune and in this recording you'll hear not only accordion, but bass and more importantly, oud. Enjoy!
Posted by Unknown at 4:13 PM No comments:

Some of my best memories of my touring days with Vagabond Opera was not only the shows we played but the people we stayed with. At the top of the list was Joey Almeida and his wife Barbara. Joey is the father of band member Xander Almeida and we always knew that once the gate was rolled back and the dog calmed down we had a place to lay our hats and so much more. After Joey made us dinner he'd regale us with tales of shark-hunting in the Pacific and crack jokes. And then the guitar would come out. Now I'll tell you a trade secret: many musicians, after their show, just want to relax quietly and I've always avoided playing music late into the night, or at all even, after a performance. Playing with Joey was always the exception.
There was something so infectious about his playing when he took out the guitar, and so inviting, that we'd all find ourselves on his back courtyard strumming and humming and singing along, to Johnny Cash songs, Tom Petty, and even Mariachi tunes (Joey's Mexican-American and proud of it), and surprises. New songs, new songwriters to me.
One of those songs was Robert Earl Keene's CHRISTMAS WITH THE FAMILY. Do yourself a favor and take four minutes out of your life to listen. Hanging with Joey, then listening him sing that song inspired me to want to write a song, a funny song, a working class song, a song with alcohol and something with a Mariachi flavor. Those were my guideposts but I had to wait for real life events to inspire it.
A couple of years later I watched the screens of Midway airport as they inexplicably indicated "CANCELLED" for each and EVERY flight. As we all learned soon enough there had been a fire and a suicide and all sorts of stuff. You can actually read the story by Maria La Ganga in the LA TIMES where I was interviewed about it or just read the quote about me here:

"As Howard was trying to kill himself in the air traffic control center, Eric Stern was just waking up in a cot room at Chicago’s Midway International Airport. The performance artist and opera singer was en route to his Portland, Ore., home after a trip to Philadelphia. What should have been an easy stopover in Chicago turned into a nightmare, disrupted first by terrible weather and then by the fire at the air traffic control center. “I have bad luck,” he said at Midway. “I came from Philadelphia last night. That flight was delayed three hours because of weather. When I got here, my flight to Portland was already gone. They have cots here. I decided to stay on a cot. “My flight was supposed to be this morning at 8:30,” Stern continued. “They texted me and said it was delayed. Then, like other people, I checked the board and it said ‘canceled.’ “I have seen a number of people come in, look kind of stunned at the departure screen because everything says ‘canceled.’ The next thing they do is lift up their iPhones and take a picture,” Stern said

Here's what happened next: I walked to a motel, 'cause I was too cheap to take a cab. I found a canteen underneath the overpass and went back and forth between the canteen and the motel for two days, drinking and sleeping. I made a facebook post about it:

After venturing on foot from the Midway airport. Restaurant Los Comales on 78th and Cicero. Portrait after 2.5 Coronas:

The guitar is wearing her mask for carnivale, the one with the black flowers, and even though this is a Mexican Cantina I hear Palmas beating on the radio and the hostess is a girl leading into womanhood.I walked three miles to here, this little box, a day of the dead coffin of a cantina, Oaxacan geckos climbing the walls and a plastic flowered-shrine to Guadalupe.My table has only one leg, a leg of blue and pink sugar skulls, a heart rendered in every forehead.You'll find me here now and maybe later after the long blistering walk, past the home depots and the stupid black-topped shined Olive Gardens and Friday's, some place called Shenanigans, not a decent place for a thirst man for three miles until this one, past the lubricating car stalls with chains of oil cans hanging soup-belled over the concrete bays.

And just when you couldn't stand it anymore the road lifted itself up, I expect a long trek over a godless freeway but instead Black-Eyed Susans and Foxtails augured and framed the railroad (not the freeway), it emerged like a wide river, it was like the Mississippi River, that wide, and even though we are of an age weary with fetishisation and glorification of the great iron works the dams (Roll on Columbia!) and the rails, we crave the world now on a smaller scale, sustainable as we say, I saw today the color of white smoke billowing from the mighty sand blasters down there, the hard scrabble men sledgehammering the spikes in the heat, and it made me want to commission Diego Rivera to paint a mural of and for the workers, made me want to give a Whitmanesque Yawp (I did!) and brought into clear focus Sinclair, Bellows, Sandburg, Theodore Dreiser and Richard Wright. Chicago!

I could have gotten on the train from the airport and gone to the art museum.
But then I wouldn't have seen the black-eyes Susans beckoning a vision of america where the "a" is still capitalized. My regards then, facebook friends. The cots are not for me, the proprietor has just bought me a beer and a Lebanese friend is coming to meet me now. Tonight I will lay my body down and push my breath into the mattress at the Saratoga Inn, the low-shelf motel that lies somewhere between this flowering Cantina coffin and the vision of the endless railroad ties.

People are generous. I've been at the Cantina for more than three hours talking to the owner about Mexico and Narco's and then my friend showed up and we spoke of the civil war in Lebanon, and there were laughs and comradeship and the owner kept making different drinks to try and bringing us out taco salads and enchiladas and stuff we didn't order and then at the end the bill was like nothing and I feel blessed by new friendship and hospitality. Taqueria los Comales if you ever go...

And the song came together.
As for Amy (names have been changed to protect the privacy of ex-girlfriends)...that was a long time ago and none of your business.

Posted by Unknown at 1:43 PM No comments:

Saturday nights I play accordion in a French restaurant. Over time I've gotten to know the staff and one night on my break I got into a conversation with the hostess. Shining upon her face was a bloom of happiness I had never seen and in speaking with her I discovered the source: She glowed with the particular shade of warm satisfaction that can only come with a break-up. She was leaving her boyfriend, the bartender, to start a new life in New Orleans and I'll always remember what she told me in recalling her life in Romania. "If I were at home, in our village, yes, we'd be married on Sunday and that would be my life. But here..I can...how do you say? Be my own person more. So I am moving to New Orleans."

That was the kernel of the song. The rest, about a restaurant that's closing because all the waitresses are giving free food to their boyfriends, the cook sleeping in the kitchen, all that was either made up, or an amalgamation of experiences of my years of working in restaurants in my twenties.

Enjoy the song, I'll be selling the whole EP online for $5 and some change. If you download it here I'd appreciate if you went to CD baby and paid for it officially. The concert at the Old Church for the Minor Key Concert Series is in Portland and it's December 2nd at 8 PM. Buy Tickets here.
Posted by Unknown at 1:24 PM No comments: